Not everyone begins a new year on January 1, right? That includes IceCubers, who decided a while ago that mid-May would be a good time to start a new year of data for the South Pole neutrino observatory. 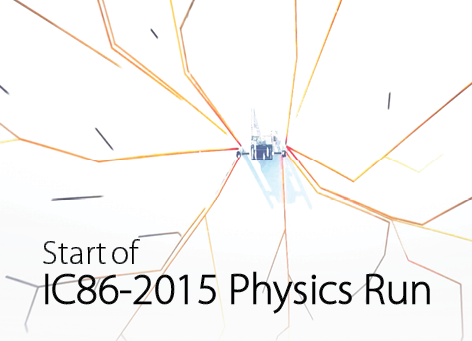 The IC86-2014 physics run ended on May 18, 2015, wrapping up another successful year for the IceCube detector.

Let’s give some numbers for this run:

IceCube has always performed extremely well, but the team operating the detector is pushing for perfection. During the first months of operation with the full detector, back in 2011, IceCube uptime was 99.2%. These days, a standard week for IceCube ends with an uptime above 99.8%. The improvement is more visible when we compare the clean uptimes—from when all DOMs are taking data—which went from 90.9% in 2011 to 97.0% in this last physics run.

Every detail counts, and now our better understanding of the detector and its operation helps us beat limits that seem impossible to surpass. But the IceCube team, with priceless contributions of our winterovers, keeps doing it.

A physics run, encompassing one year of IceCube data, contains around 1,000 eight-hour data records, also called runs. Each run has around 300GB of raw data, which is then filtered to obtain roughly 30GB of clean data, i.e., events with interesting properties for physics. This is an amount that is convenient for transfers to the main IceCube data warehouse in Madison. Due to limited satellite bandwidth, only 100GB of data can leave Antarctica daily to feed the voracious needs of about 300 IceCube researchers around the world.

The IceCube Lab at the South Pole collects data of over 5,000 IceCube light sensors. Around one terabyte (TB) of data is recorded everyday, which is then filtered and cleaned and sent to the north over satellite. Video: Fragment of “Chasing the Ghost Particle: From the South Pole to the Edge of the Universe”. WIPAC/MPM.

The IceCube Lab at the South Pole collects data of over 5,000 IceCube light sensors. Around one terabyte (TB) of data is recorded everyday, which is then filtered and cleaned and sent to the north over satellite. Video: Fragment of “Chasing the Ghost Particle: From the South Pole to the Edge of the Universe”. WIPAC/MPM.

“The process of restarting a run causes a small but non-negligible loss in our uptime. But sometimes one of the DOMs will stop sending data, and we need to recover communication with it. There’s a trade-off, a push-and-pull between dropped DOMs and lost uptime. We find that balance by splitting our data into eight-hour runs,” says Matt Kauer, who is the IceCube run coordinator.

The run transition periods, when the detector is reconfigured, are responsible for a loss of about 0.5% of the IceCube uptime. “With the IC86-2015 physics run, we have implemented a new mode of operation that allows us to run for 32 hours without the need to reconfigure the detector,” explains Kauer. “This provides us an extra 0.4% of uptime,” he adds with satisfaction.

The detector’s success is based not only on its uptime but also on the physics results it enables. And the calibration of the detector is a key step in ensuring the quality of its data. IceCube calibration uses light generated both from LEDs on the sensors and from single photons present, even in the deep, dark ice. These single photons are used to determine the gain of each sensor, at the level of a few percent.

“Because the brightness of a neutrino event is related to the neutrino energy, carefully calibrating the gain of the detector modules is important to ensure the accuracy of our physics results,” explains John Kelley, who is the IceCube detector operations manager.

However, the presence of a high-energy neutrino in IceCube is good news not only for the IceCube collaboration but also for other experiments exploring the extreme universe with neutrinos, gamma rays, cosmic rays, light, or radio waves.

For this reason, the IC86-2015 physics run has added real-time alerts whenever a high-energy neutrino is detected. These alerts will be sent to other telescopes and detectors to search for a coincident optical, gamma-ray, or radio flash at the same time and in the same direction of the sky. “Our hope is that these follow-up observations by other telescopes can help us solve the mystery of where these high-energy neutrinos are produced in the universe,” says Kelley.

Only a few hours have passed since the IC86-2015 physics run began on May 18. As of today, a few neutrinos and already some millions of cosmic-ray muons are waiting to be analyzed by IceCube researchers. Will this run bring us an even higher energy neutrino? Or maybe the first cosmic-ray source? How far can we go in the precise measurement of neutrino oscillations? What about learning more about dark matter?

Not sure what you might think, but we cannot wait to see what the new data will tell us about our extreme universe.