ARA, the Askaryan Radio Array, is a detector designed for the observation of ultra-high-energy (UHE) neutrinos using the emission of radio waves produced by their interaction with Antarctic ice. Aiming to include 37 stations spanning 100 cubic kilometers of ice near the South Pole, two of the three fully deployed stations have been taking data since 2013.

The ARA Collaboration announces today the first results using data taken during 10 months in 2013 by these two stations, named A2 and A3. Researchers performed a search for UHE neutrinos that resulted in no neutrino candidates. The study also sets a neutrino flux limit of 3×10-6 GeV/cm2/s/sr for an energy of 1018 eV, the energy where most UHE neutrinos are expected to be observed. These results, submitted last Friday to Physical Review D, significantly improve on those published a few months ago with the prototype testbed station and prove that ARA is on a good track in the quest for GZK neutrinos. 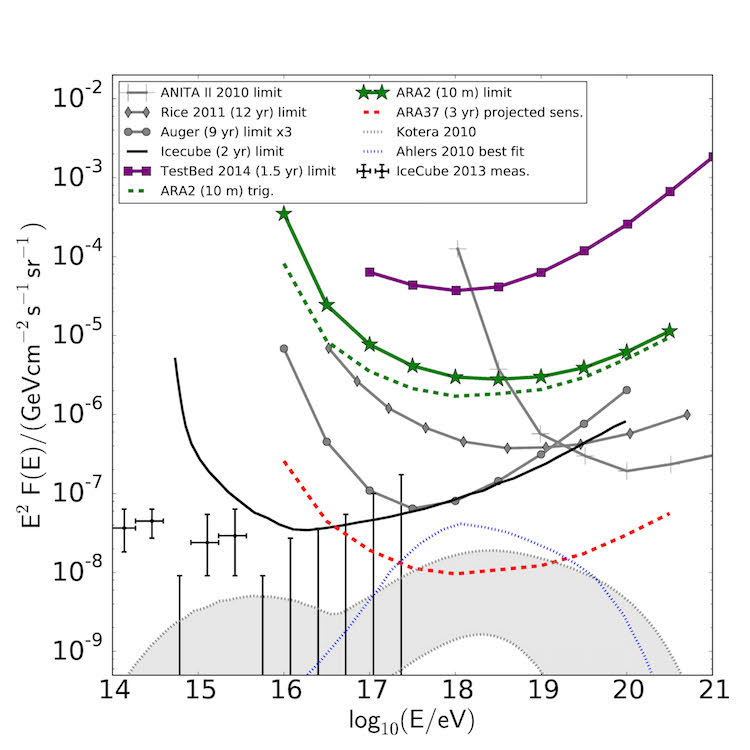 Due to the interaction of UHE cosmic rays with the cosmic microwave background, the so-called GZK effect, and similar absorption mechanisms for high-energy gamma rays, neutrinos are the only known particles feasible for the study of UHE sources more distant than a few tens of Mpc (megaparsec).

However, at energies above 1016eV, detectors of several gigatons of matter are needed to detect even a few of those neutrinos. Radio waves can travel long distances in ice, especially in Antarctica where the ice is very transparent. Waves with frequencies around 500 MHz can travel around one kilometer before being absorbed. This makes it possible to design a detector such as ARA-37 with radio antennas spaced widely in a volume of over a hundred cubic kilometers of Antarctic ice. The detection technique and relatively low number of stations per area makes ARA an expedient detector for UHE neutrinos, both technically and cost-wise.​

Each of the ARA stations comprises 16 antennas, deployed on strings in groups of 4 at the bottom of 200-meter-deep holes. Beyond the desired UHE neutrinos, these antennas also register thermal and anthropogenic background signal, and even some cosmic-ray signal.

The detector records events at a rate of roughly 5 Hz. Background is largely dominated by thermal noise, although human-induced backgrounds become more important during the polar season, when the activity at the NSF-managed Amundsen-Scott South Pole Station grows exponentially.

Researchers filter thermal noise events using the differences in the timing patterns of the recorded signal. For the remaining events, they reconstruct the vertex where the radio wave originated. This allows them to also filter man-made induced waves, since their vertex will reconstruct to the surface, while neutrino-induced waves originate in the ice. Cosmic-ray showers can also produce some radio pulses, but ARA will see those in the same region as the human-induced waves. Muon bundles from cosmic-ray showers are a possible signal source under investigation, however they are expected to be a small background.

The optimization of this event selection allows them to reduce the background expectation for both stations to around or below 0.01 events. The number of UHE expected neutrinos for the considered energy range is 0.11 events.

“As expected, no neutrino signal was found. But we have used this data to set an upper limit on the UHE flux,” says Thomas Meures, corresponding author of this paper. “These results are not yet competitive with other experiments, such as IceCube or Auger, but do indicate the power of the full ARA-37 design,” adds Meures, who signs this work as a researcher at Université Libre de Bruxelles and who joined WIPAC in June 2015.

Data from station A1, together with improvements in the livetime and the data acquisition systems of all three current stations and the near-future deployment of a few more stations, will turn ARA into a first-class UHE neutrino detector.