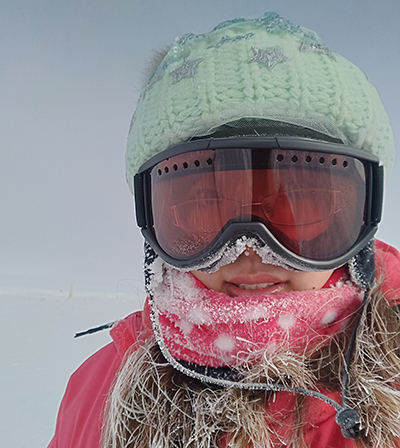 New UW–Madison assistant professor of physics Lu Lu’s research program combines the past with the future. Her research looks for sources of ultra-high-energy particles, which is done by analyzing data that has already been collected. As she says, “Maybe data is already talking to us, we just haven’t looked.” But she is also working toward improving future data collection, which will require more technologically advanced detectors. “My teachers, my great masters, have taught me that the current young generation has the responsibility to look into new techniques to go to the future for younger generations to proceed forward,” she says about her work in sensor R&D.

On January 1, Professor Lu joined the Department of Physics and IceCube. Most recently, she was a postdoctoral fellow at the International Center for Hadron Astrophysics at Chiba University in Japan. To welcome her, we sat down for a (virtual) interview.

What are your research interests?

My prime interest is astroparticle physics, and my ultimate goal is to find the sources of the highest energy particles in the universe. These particles carry energy of about 1020 electronvolts. This is higher energy than what we have from the Large Hadron Collider and human technologies. The real attractiveness here is we don’t know how nature accelerates these particles. And once we identify the sources, we can test new theories beyond the Standard Model using sources created by nature.

What are one or two main projects you focus your research on?

I’m involved in two experiments. One is IceCube, the other is the Pierre Auger Observatory. I was doing cosmic ray analysis, but cosmic rays are usually charged particles and they are deflected in the magnetic field of the galaxy; they would not travel in a straight line. IceCube studies neutrinos, which are neutral particles, and they travel directly from the source. Pierre Auger detects ultra-high-energy photons, which are also neutral particles. One thing I want to do immediately after I join Madison is to combine these two experiments to do a joint analysis. We have photon candidates but we haven’t really tried to connect them in the multimessenger regime. By combining Pierre Auger photons with IceCube neutrinos, we could possibly find a transient source, a source that doesn’t constantly emit ultra-high-energy photons or neutrinos but all of a sudden there’s a flare. This type of analysis has never been done, but we have data on disks.

The second thing I’m interested in is using new sensor technologies. In IceCube, we have Gen2 being planned right now. Instead of using a single photon sensor, we’d use a more sensitive design and R&D. UW–Madison is taking the lead of designing this future detector. There’s also radio technology. So, to detect the highest energy neutrinos we need to build a large-volume instrument. With an optical array, it is really hard to scale up because one has to drill holes inside the South Pole, which is really expensive. But radio technology doesn’t have to go so deep, so they can bury their detectors on the surface areas, and the radiowaves can transmit further away than optical photons do in ice. For optical, you have to make the detectors very dense, but for radio you can make the antennas further apart, so that means you can have a larger area and detect more events easily. I think radio is the way to go for the future.

You said you have a lot of data collected already and just need to analyze it. How do you analyze the data from these detectors?

We would have to search for photon candidates from the data from Auger, and identify where it comes from and what the time this event happened. Correspondingly, do we see neutrinos from IceCube coming from the same direction and at the same time? Because you can never be sure it’s a photon. It could be a proton. We then want to build a statistical framework to combine different multimessengers together in real time.

What does it mean if you find a photon in coincidence with a neutrino?

Cosmic rays were first detected more than 100 years ago, and there’s a rich history of studying where they come from. The mystery of origins still remains today because our poor knowledge on the galactic/extragalactic magnetic fields and mass composition of cosmic rays. In my opinion, the most probable way to solve this puzzle is to use neutral particles. If we can identify ultra-high-energy photons in coincidence with neutrinos, that is a smoking gun that we are actually looking at a source, and we can finally pin down where in the universe it is accelerating high-energy particles. And therefore, we can study particle physics maybe beyond the Standard Model. It’s just like a lab created by the universe to test particle physics.

What is your favorite element and/or elementary particle?

What hobbies and interests do you have?

I’m afraid I’ll disappoint you because my hobby is related to my research: Augmented reality. When I heard about something called Microsoft Hololens, I thought, I could make IceCube a hologram. I bought these special glasses, and then made a program on it and used it for some outreach events. But the glasses are very expensive, so people said, “Okay we can’t buy hologram glasses.” So I moved it to mobile phones so that everyone could look at it for fun. It’s called IceCubeAR (note: download it for iPhones or Android phones). I made it with a group of friends in Tokyo.