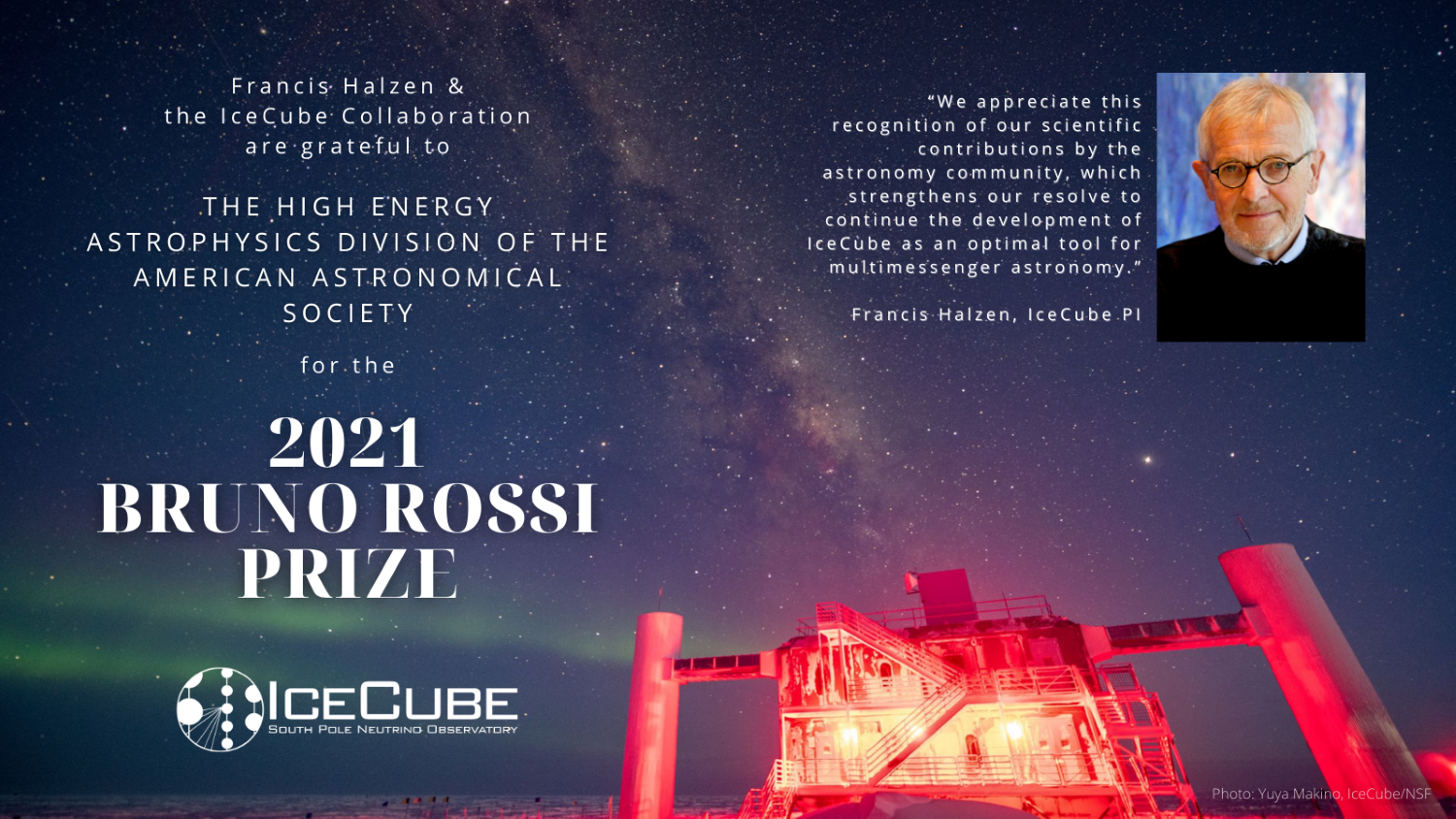 The 2021 Bruno Rossi Prize was awarded to Francis Halzen and the IceCube Collaboration “for the discovery of a high-energy neutrino flux of astrophysical origin.”

The Bruno Rossi Prize is awarded annually by the High Energy Astrophysics Division of the American Astronomical Society. The 2021 HEAD awards were announced last night at the 237th AAS Meeting, which is being held virtually. Named after Italian experimental physicist Bruno Rossi—who made major contributions to particle physics and the study of cosmic rays, launched the field of X-ray astronomy, and discovered the first X-ray source, SCO X-1—the Rossi Prize is awarded “for a significant contribution to High Energy Astrophysics, with particular emphasis on recent, original work.”

The IceCube Collaboration is made up of over 300 researchers from 53 institutions in 12 countries. Halzen, the Hilldale and Gregory Breit Distinguished Professor of Physics at the University of Wisconsin–Madison and the Wisconsin IceCube Particle Astrophysics Center (WIPAC), is the principal investigator of IceCube. The international group maintains and operates the IceCube Neutrino Observatory, a cubic kilometer of ice at the South Pole instrumented with optical sensors that can detect signals from high-energy neutrinos from outer space.

“It is a great honor to have been chosen as recipients of the 2021 Bruno Rossi Prize,” said Olga Botner, professor of physics at Uppsala University and former spokesperson for the IceCube Collaboration. “The discovery of the ubiquitous flux of high-energy cosmic neutrinos represents the culmination of a long-standing dream to explore the universe in a new ‘light.’ We are proud and excited by the recognition of the tremendous collaborative effort leading to this pivotal result.”

IceCube’s first observations of high-energy cosmic neutrinos garnered the 2013 Physics World Breakthrough of the Year Award. In September 2017, IceCube detected a high-energy neutrino from the direction of a blazar called TXS 0506+056—the first-ever evidence of a source of high-energy cosmic rays. This detection signaled a resurgence in the field of multimessenger astronomy, where scientists combine observations of light at different wavelengths and other cosmic messengers made by detectors and telescopes across the globe and in space in order to gain a more complete understanding of the universe.

“The Rossi award highlights the importance to astronomy of IceCube’s discovery and observations of cosmic high-energy neutrinos,” said John S. Gallagher III, IceCube collaborator and W. W. Morgan & Rupple Bascom Emeritus Professor of Astronomy at UW–Madison. “IceCube is providing a powerful multimessenger approach to studies of astrophysical processes in the universe that cannot be accessed by more traditional methods, which rely only on observing their radiated light.”

“This award of the Bruno Rossi Prize is very special because it recognizes IceCube as the collaborative effort that it is,” said Halzen. “We appreciate this recognition of our scientific contributions by the astronomy community, which strengthens our resolve to continue the development of IceCube as an optimal tool for multimessenger astronomy.”